I have just returned from Papua New Guinea (PNG) where I was on assignment with Medicins Sans Frontiers - MSF (aka Doctors Without Borders). My job was to photograph the NGO's medical unit that has been set up in Lae to help with the cholera epidemic; as well as their Women and Children Support Clinic that specializes in the medical treatment and counseling of rape and assault victims. An AUSAID report described PNG in 2013 as follows: There is a humanitarian crisis in PNG. But its not starvation. Or war. Or widespread disease that is the crisis. It's violence. Inter-tribal violence, and domestic violence that are epidemics unto themselves. My second scheduled assignment was to go to a remote village called Tari in the highlands, located on a mountain top with a dirt airstrip, with two warring tribes positioned on either side;  On this occasion, the tribes had put aside generations of conflict,  to unite against a government project to build  an LPG gas line through the remote, mountainous region - with what the tribes allege is a total lack of adequate compensations for the significant intrusion into their virtually untouched world; noting the highland tribes are widely recognized as the most fierce of all tribal warriors, who come to arms at the slightest provocation. This situation is hardly slight.... and so  they rally in full force. My assignment was to photograph the MSF surgical trauma team in action during the riots; which had resulted in numerous casualties, with the numbers mounting. The  situation was extraordinarily dangerous for these doctors and supporting staff,  who held their ground, barricading themselves in, tending to those in need as the killing  and rioting  continued around them.

Due to its prolonged unpredictability, the situation became a logistical nightmare when it came to getting in and getting out. Subsequently, after much deliberation and meetings in Port Moresby and dashes to the airport and cancelled flights and growing security concerns and finally, government intervention, the assignment was finally, formally, put on hold. While waiting for the situation to change, which took a few weeks of on-going fighting and several deaths more, I visited a coastal festival in the north, to experience some of the cultural traditions that flourish in what is one of the most beautiful and unexplored countries in the world. For excerpts of the MSF assignments, see article below.

Note: Most of the reporting and information accrued during this assignment is sealed.

In an in-house newsletter there is reference to a member of MSF’s global operations who died a year before in Afghanistan. The widow of the deceased wrote to MSF in memory of her husband. “ … continue in your struggle to do good, for everyone has their day.” These humanitarians are hard core, going into conflict zones like unseen heroes testing their bodies and spirits to a limit few can imagine, let alone endure. And their only reward is caring for those in need.
*
The compound for the MSF team has a modest colonial timber house with a guard post manned by two, plus a dog, a rottweiller, which is only brought out at night. It also has high gates and fences with spiraling barbed wire; a type of fortification that is ubiquitous around PNG... 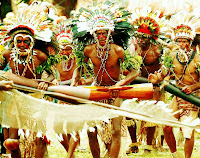 Dropping my gear alongside a netted bed, I’m immediately driven to the medical facility to meet the team and to be briefed by the field coordinator on security protocol and areas of operation.

The medical clinic is attached to an age beaten hospital that consists of barrack like wards alongside a large four story box building for the ER and outpatient clinics. It too has security gates and guards monitoring it 24/7, with a gated entrance that is permanently locked but for patients and staff passing in and out.

The clinic has ten petite rooms for consultation and surgery, with three offices for administration and work stations for the medical crew. It was set up exclusively for the medical care and psychological counseling of women and children who have been abused, beaten and or raped, both inside and outside the home.

It’s a man’s world here, with an intense tribal undercurrent that dictates what happens on the street and in the home. Domestic and street violence against women is a major problem that the Government, assisted by foreign governments and NGOs, are working progressively at changing; so much so many social programs and initiatives in PNG are being copied, due their effectiveness, by other nations throughout the Sth Pacific. Advertisements opposing violence against women, as well as alcohol and drug abuse images and slogans are regular features in all media, with the implementation of educational programs and the establishment of women support groups now widespread throughout the country. T.V shows such as the YLM Report, of which SCP worked on several assignments with the legendary local production company, Media Haus, is another example of the efforts underway to turn things around and to promote a better way of life for all. The support of NGOs such as MSF and their medical facilities, where victims seek medical attention and counseling, is an exemplary example of initiatives finding their mark, particularly in times of crises.

The MSF team in Lae consists of one doctor from India and another from the US, a nurse from Belgium, two logisticians, one English, the other French, and a field coordinator from Holland. Upon meeting everyone, I’m escorted by the field coordinator around the hospital grounds. Moving down extremely long, outdoor walkways that criss cross throughout the fenced off compound, we come across the cholera facility built by MSF. It’s a mash unit, small scale.

When cholera cases were being reported all over the country recently, MSF responded full throttle, entering ahead of any other international NGO to build medical facilities for the hundreds of incoming who had contracted the disease. Later, as I read newspapers dating back weeks, I came to learn of the panic that had swept the country. Because people bathe and wash their clothes in the rivers, the disease moved quickly throughout, entering one village after another.

Through swift government and NGO intervention, the outbreak was quickly contained, at least in Lae and , although the regions remain on high alert as other outbreaks are reported from one province to the next. MSF team members from Lae were sent to the city of Madang at a moment's notice during my visit. Another outbreak was taking hold. I would hear eight days later that the number of dead had increased from 30 to over 300. The headlines had long since raised the alarm. The fact locals were virtually ignorant, however, as to the disease and how it spread, and few educational and health programs had been implemented successfully at this stage (illiteracy is near 80% in PNG, which is a major hurdle), its assumed that many more have died in the villages, never knowing what hit them.

*
Being new to PNG, MSF’s presence and mission is growing. They are becoming well known, or at least better known. They still have a long way to go, but their effective and swift response to the cholera epidemic has helped tremendously in getting recognition by the government and local communities alike. Subsequently every body has won because of their intervention.
*

For photographs of this assignment,
go to PAPUA NEW GUINEA PORTFOLIO
Posted by Smash Compass Productions at 1:46 AM