Over the last ten years, SCP Director, Bradley Rae, has worked on a freelance basis in Port Moresby, PNG. Teaming up with Media Haus Productions, he's responsibilities in the field included photography as well as all facets of documentary film making; including filming, editing, script writing, sound composition and voice over.

*
There were several projects that were worked on with Media Haus Productions. Some of many, are listed below. Click on images to enlarge.

(i) World Bank conference that celebrated the introduction and overwhelming success of its new social/ employment program, called Business Edge, into PNG. 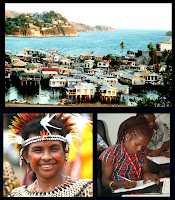 Overview of project: In the past few years Port Moresby has experienced a population explosion; being a consequence of urban drift and the large number of people inundating the city in search of a new life. What has resulted is the overcrowding of existing settlements, and the creation of new ones, many of which are without water or electricity.

Unemployment, violence and crime are a serious problem throughout these settlements that are widespread in the capital and other major cities, including Madang and Lae ( See photographic assignment with Medicins Sans Frontieres  in Lae). 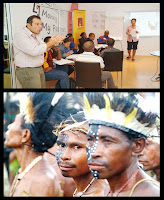 The purpose of the World Bank initiative is to work and create with local businesses training programs that will help provide new opportunities for the many in need.

Filming and photo shoots occurred at several locations around the capital, including the World Bank head office, class room environments and various street scenes in downtown Moresby. World Bank and Corporate Executives were interviewed at the graduation ceremony, as well were participants in the program.
Photographs depict the tribal roots that dominate the PNG culture, students in the program, and a settlement in Moresby.
* 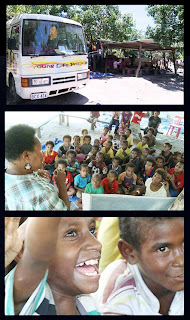 A second documentary film was about an NGO initiative that, with the support of the Port Moresby Chamber of Commerce, has implemented a new educational program called Laikim Laip.

Overview of project: The Laikim Laip program is a mobile bus unit that provides educational material and classes for children and young adults in the villages and settlements around Port Moresby. Due to a lack of money and resources, and an national schooling system that is stretched beyond its limit, this program is the only opportunity for many to learn basic numeracy, literacy, nutrition and health care.

Filming took place at two settlements, where outdoor classes were conducted. NGO and Chamber of Commerce personnel were interviewed, as well as participants from the settlements. Asia Pacific Bank funds the program. 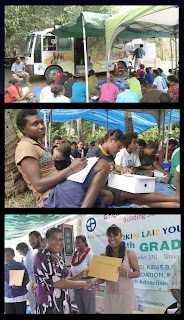 One of the most rewarding moments throughout the filming came when a participant, a young, unemployed street criminal, spoke of how, through the Laikim Life program, he hoped to change his life and be somebody his family could be proud of. He is one of thousands from these poverty stricken settlements who are working toward the same objective; that being to become educated, and to live a better life.

Photographs are of the buses in two settlements, with students between the ages of 6 through to 35 years old attending the classes. As is typcial at such gatherings, the Media Haus crew's presence is always respected and greatly appreciated, with such documentation playing a crucial role in raising awareness about the programs.

*
Other documentaries I was involved in with Media Haus Productions included NGO operations devoted to thwarting the spread of Malaria across the country; and the filming of PNG SDP field operations and the building of telecommunications towers in remote areas throughout the Western Province and highlands. Corporate Executives, workers from various affiliated industries involved in the project, and local populace were interviewed.

ADDITIONAL IMAGES FROM THE FIELD

Photographs below were taken when we were dropped off at the top of Mt Karak to document the progress of the telecommunication towers being built throughout the Western Province and Highlands; and the overall impact the new networks will have on remote communities and villages that are only accessible by helicopter.
This is one of the mountains we landed on, which was surrounded by jungle that blanketed everything for as far as the eye could see.( Cloud covering the peak prevented the chopper from landing the day before, despite several attempts). It was an incredible adventure.

Media Haus Productions is regarded as one of the finest documentary outfits in PNG. It is responsible for the creation of two national TV programs, namely (i) YLM Report, which explores AusAid and PNG government initiatives, and provides a contemporary snapshot of life in Port Moresby. The program was featured at a United Nation Conference in South Africa. And (ii) Wokabaut PNG, which focuses on the traditional cultures and customs of the country. Other clients of Media Haus Productions include PNG Red Cross, the World Bank, British Palm Oil Co, Rotarians Against Malaria and Digicel Telecommunications.)