Link to full length video (8.31 min).
Working with NGOs operating out of Uganda and Kenya.

SCP' assignment was to drive to Gulu, North Uganda (Kony Country that stretches to the border with Sudan and beyond) where we filmed, photographed and interviewed child soldiers (returnees). Finding the courage as adults, they escaped from Kony and his Lord Resistance Army, knowingly walking hundreds of miles in dense jungle, many crossing the Nile River and succumbing to its hazards. It was travel through jungles filled with rebel militia and bandits, and opposing government troops renown for committing atrocities against the very ones they were meant to protect. It was a situation that left civilians caught in a terrifying conflict, with no help coming from either side.  It was hell on Earth....
Most returnees had been held in captivity for many years, and had witnessed and or committed truly heinous atrocities with shocking regularity. Children had become a weapon of war,  raiding villages in jungles so dense and remote that Government troops and helicopters had little hope of tracking them down. Try what they may.

Having just arrived back in Oz, I will be working on a high impact presentation for an NGO that specializes in the rehabilitation of these child soldiers; who, now free, have returned to  communities that fear and despise them.
The primary focus of the presentation is two fold, telling the stories of their abduction, and their return, and emphasizing the extreme violence these children went through to protect their families. To flee from the rebels was a death sentence against one's village.  So the children stayed, brainwashed into killing machines by a man who deemed himself the son of God.

In all, approximately 30 000 children were taken as Kony and his army moved furtively between Uganda, Sth Sudan and the Democratic Republic of Congo, ever elusive as they fragmented into small groups spreading out through dense jungle concealing them from the air. Weeks or months later, these same groups will reappear and rendezvous at the perimeter of an unsuspecting village. And so the killing and carnage continued without prejudice as they attacked unarmed civilians and their homes to replenish supplies and their forces, with more children. 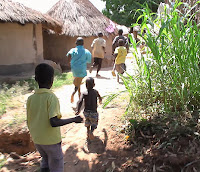 Those taken were always young, very young, mostly between 8 and 14 years old, to ensure they could be controlled and trained and terrorized into doing unspeakable acts of violence. The boys, as told by one interviewed, were forced by the LRA to kill and torture civilians within 24 hours of being abducted, as well are they thrown into a brutal fight against government troops who ceaselessly hunted them down in some of the hardest terrain on the planet to traverse. As for the girls,  they were forced to become sex slaves and wives of officers and soldiers of the LRA, with Kony's blessing, who granted his soldiers the right to have as many girls as they desired, and could afford to keep.
* 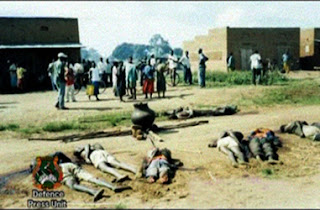 As to how and why these children committed atrocities against innocent people was a direct consequence of a very effective and very brutal form of brainwashing, still widely used through the African continent. It begins immediately following their abduction. If they did not obey an order by an LRA officer, they were severely beaten and or killed by another child, another captive, perhaps a friend who was taken from the same village... all the while the group of new captives were forced to watch. To turn away from the macabre scene of one being savagely mutilated or slowly and gruesomely tortured, was to share much the same fate. So too shall it be if one cries. These were children, frightened and helpless children who day by day literally had all sense of their humanity painfully peeled away from them; their humanity the very skin that embodies their soul, which is slowly destroyed by unrelenting killing carried out for numerous years. The barbarianism  imposed upon these children was like psychological salt being poured on a raw and wounded spirit, until the pain and guilt, until all sense of compassion and kindness was transmogrified and the sufferance of others seen anew as a bloody source of vile entertainment.  To watch another being killed was, and still remains, a necessary part of a child soldiers' training... They are made to be tough and indifferent; they are made into killers who enjoy what they do. As normal children play, child solders kill, and as decreed by Kony, they killed always in God's name.


Kony is a Christian fanatic beyond his glory days of widespread cruelty and war. He believes himself to be the son of God.  (The title of God had already been taken by his father years before, who retreated from the battlefield when unable to rally troops for his personal crusade. That's when Kony took over the leadership of the LRA.) Kony possesses an eloquence that swiftly brought government troops to his side, and as a weapon of guile, he uses his talent to convince abducted children of the righteousness of their bloody deeds and the LRA struggle. With Uganda, by majority, being a Christian based culture sprinkled lightly with Muslims, most children have a basic acquaintance with the Lord Yahweh through their families and communities... real basic, which Kony capitalizes on and expounds on with a satanic deviance or interpretation of the gospels that entraps a child's mind like a web of wickedness from which they can not escape, their innocence and faith turned cunningly and cruelly inside out to oblige his twisted sense of justice and goodwill not unto others, but unto him and his desire for power and political elevation.

These children who have been dragged into Kony's twisted psychological lair rarely attempt to escape, at least not until they are well matured and their childhood long gone but never forgotten. To escape is to be tracked down and killed. And just in case one should welcome death rather than continue to live under the rule of such a sadistic tyrant, the children are warned that their families too shall be killed along with the entire village in which they reside. And such threats these children know well to believe, for they have partaken in such mass murders and annihilations of families and villages many times over. Fearing for their lives and that of their kin, these children are not going anywhere, and into the ranks of the LRA they line up, and obey, so joining an army of serial killers who are trained to fight; not for the cause of their leader, but to survive the wrath of their leader and his insatiable lust for blood.

Here's a story I heard on my travels to the war ravaged North, read to me by my partner, Zoe Connolly, as I drove along a two hundreds mile stretch of dirt road laden with pot holes the size of black holes. Zoe is a corporate lawyer turned humanitarian writer. I invited her to join me on this assignment to help with the filming and interviews of the returnees, specifically the females. While conducting research on LRA activities throughout the Gulu region, she came across a book titled, Aboke Girls... from which I recap now; not for the sake of sensationalism, but as a record of the evil reality these children are forced to be a part of and a prelude of the things we would come to learn of. (Note: the content of all interviews  is presently restricted)

Aboke Girls tells the story of 130 girls abducted from a school in Gulu by the LRA, and the things they experienced and witnessed as told by the 30 (only) who were released months later. This is but a single instance taken from a twenty year war that tore Uganda asunder; a country that is ever fearful of Kony's return; particularly those in the North, near the border,  the very region we were speeding toward...

One day a small group of LRA soldiers came across a man riding a bicycle. He was stopped and surrounded and informed that Kony doesn't like bicycles, and as such he was asked to explain why he was on it. The reason given was that he had a bad leg, which prevented him from walking. Just then a woman appeared from out of the jungle, unwittingly coming across the exchange. A gun was put to her head and then came the order that she eat the man's leg off, or be killed. One bite after another, she slowly began. When she had eaten her way to the bone of the man's leg , she was given an axe and told to chop through it, and thereafter she resumed eating until the leg had been completely severed. The soldiers then released the man, and walked off into the jungle laughing at the site of the woman's face covered in blood.

These were the people I had traveled across the world to talk to... child soldiers... the purpose of my assignment being to raise awareness of their plight, and to help promote the efforts of the NGO, Third Hope Uganda, which is dedicated to the difficult task of re-intergrating child soldiers back into the communities and villages from whence they came; to people who, out of fear, are greatly reluctant to receive them... 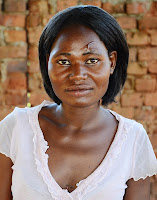 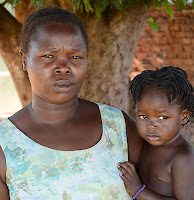 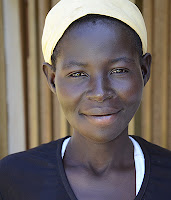 (Women who were taken as children... only to reappear many years later)

But just how does one openly receive and embrace a child they no longer know...  a child who has killed and tortured many innocent people over years... a child who has been raped and beaten daily by sadistic strangers; one whom each girl is forced to wed and bed with every night; men covered in the blood of a thousand days of killing...
Impossibly, courageously, some of these children will return home to begin life again...  tormented and frightened and ashamed and unimaginably traumatized.... with many of the girls, now women, returning with their own children, born in captivity and HIV positive. These child soldiers who are fortunate enough and strong enough to escape, traverse a 1000 miles of jungle on their own, some with their young children in tow, hiding from bandits, other tribes, government troops and Kony's rebels who rarely ever give up the hunt. For those who survive such a journey, they return to a crippling stigma that crushes any hope of them, or their families, ever living a normal life. Most are ostracized and forced to live alone, with no counseling or support from either their families or the government. Prone to depression and post traumatic stress,  the suicide rate of child soldiers is understandable high. But it doesn't have to be... 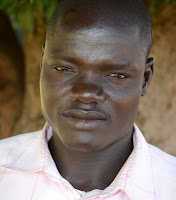 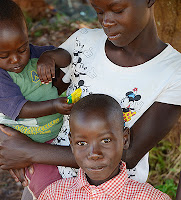 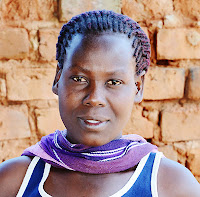 This couple was held captive by the LRA for many years. They are now raising their children in Gulu, and are working with Third Hope Uganda to help with the influx of other returnees.

Third Hope Uganda is a small local NGO that provides financial assistance, counseling, job training and education for as many of the returnees as they can afford. And they have hundreds on their waiting list... What the NGO is desperately in need of presently is donations to continue their work and to increase the number of returnees par taking in their programs. Donations can be made from their  website'

Posted by Smash Compass Productions at 5:30 AM